In 1947 John Try was taken on at Sun Printers as a ‘boy’ in Retouching. He was given an apprenticeship two years later and worked at the Sun as an apprentice retoucher, journeyman retoucher, assistant manager, Retouching manager, and then shift manager over all Repro departments. He stayed with Sun until 1989.

My father got me an interview with the Sun’s personnel manager, Mr Jeffreys, in November 1946. Mr Jeffreys gave me an Everybody’s magazine, a Picture Post, and a Woman’s Own, three of the many magazines the Sun printed at that time, and after I had looked at them for ten minutes he took them away from me and told me to draw what I had seen on two of the front covers. He was pleased with what I did, so took me to see Mr Eddy Edmonds, the manager of the Colour Repro departments. About three months later I received a letter from Mr Jeffreys saying that I would be employed as a ‘boy,’ working in colour retouching, and that if I was a willing and conscientious lad I would be given an apprenticeship on my sixteenth birthday. I started work at Sun Printers in January 1947, a month before my fourteenth birthday.

I did get my apprenticeship. I was put with a journeyman who was a skilled colour retoucher, and I was made to practise using a brush to draw straight lines, circles, and shapes that had to be very accurate, without any errors. To draw a straight line with a brush, we used a length of wood (which we called a ‘nine-inch’) with a rounded edge and, at each end, a small piece of cork to raise it an eighth of an inch above the work area, which could be wet. Along the rounded edge you ran your thumb and finger holding the brush. I practised using an Aerograph, an air brush that atomizes and projects artist’s water, oil, and spirit colours in a fine spray by means of compressed air from an electric air compressor – strongly recommended for creating vignette shapes. I practised using a densitometer to measure the densities in photographic negatives and positives. I was taught how to use a colour chart, which showed every colour you would find in any painting or transparency. After this I was given my first retouching job – flat copy, a very simple original. I also spent a day each week at the local print college to be shown studio skills in the darkroom as well as camera work. 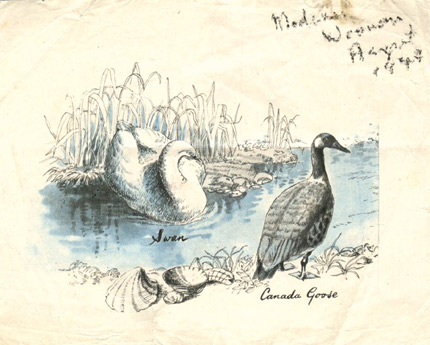 John Try’s first retouching job as an apprentice, on an illustration for an August 1948 issue of Modern Woman. The work to prepare the colour-separated negatives involved eliminating tone from the line negative and “flattening” the lines on the tone negative. He then had to remove all unwanted lines from the tone positive and check its density to make sure that it matched the original art work.

The most challenging project I worked on was with my journeyman, Fred Coles, one of the top retouchers in the department. The project involved 3’6” x 2’6” plates of paintings by great artists, the originals of which were hanging in London galleries. We both went up to London to check the original paintings with our colour charts and make notes and take density readings of the true colours. We still worked to a transparency in a light box that magnified the image, but we were able to refer to our notes on the original paintings. The finished works were printed on very thick art paper and were intended for framing. The publisher of the printed art work was Frost and Reed, and Fred Coles was the only retoucher who did the Frost and Reed work, with my help as an apprentice.

After my apprenticeship I worked mainly on front covers of magazines. Retouchers were given jobs that were commensurate with their skills. Everybody was graded as either average, good, or very good, with ₤5 difference in wages. Supervisors got ₤10 more than the top rate. The work was prioritized by printing deadline and by publishing date.

In our work we used chemicals – ferric cyanide for reducing tones, and pure cyanide for producing soft cuts on plates. Permanganate was used for flattening tones, and cotton wool was used for cleaning plates. There was Photopaque – a paint that dried very quickly under a blower – for blocking out work on negatives, and there was black lacquer, which was made by Sun Printers’ Ink Factory and was used for waterproof painting-out of positives. The paint brushes we used were Winsor & Newton, made in England, Series 16, sizes 1 to 6. And, of course, air brushes were used for spray work.

When I started at the Sun, the retouching rooms were in the old Sun Engraving building above the top entrance on Whippendell Road, opposite the shops. This part of the factory was in terrible condition, with a sloped glass roof that made the rooms very hot in the summer months. In one small room there were twelve double retouching frames (not very bright to work on; the surface was of frosted glass with sloping mirrors behind it and electric bulbs that hung behind the glass), plus two checking frames, and three washing sinks and one for dishes, where we reduced positives. There was another very small room (about 4’ x 5’) for spirits, and there was a second retouching room with five double benches and two sinks. In all, there were about thirty-four retouchers in these rooms. In 1949, twelve (myself included) were transferred up the road to the Rembrandt building. We stayed there until our move into the new east end Process Block on November 3, 1959.

Our new premises were about 200’ x 100’, with a 20’ ceiling and small windows, each with its own sun shade, 18’ up the wall. Lighting was banked fluorescent lighting with diffusers. We had air-conditioning ducts that ran across the ceiling, with large blowers whose vanes we could adjust to change the direction of the air, and there were extract vents on the pillars. There were also rows of sinks and drying cupboards. The new retouching frames were 10’ long by 3’ vertically, each with a sloping surface of frosted glass and, behind that, banks of fluorescent lighting above a curved surface painted pure matte white. We also had light boxes on each side of the frame to accommodate two journeymen, and one magnifying light box for every two journeymen.

How the work was done

Originals would be delivered to the Studio department in the form of flat copy or transparencies. The Studio would also receive a layout of the job, and the layout would accompany the job right through to the retouchers and then to the planners. The Studio used the layout as a guide to reduce or enlarge the image when making the negatives. (Negatives and positives were produced on glass until about 1955, when scanning machines were introduced and glass gave way to film.) By using red, green, and blue filters on the camera, separate negatives were produced for each of the four colours that would eventually be used to print the image – yellow, red (which we called magenta), blue (which we called cyan), and black (which we called the ‘key,’ and which would be made using all three filters). The four colour-separated glass negatives and the layout would then be sent through to the retouchers. Understand that these negatives were black-and-white tone but that the coloured filters had created a different density of each tone on each negative. The retoucher would put the four negatives on his frosted light frame, look at his original, and decide which areas of each negative he wanted to block out with Photopaque. Blocking-out was only done on flat copy work, where there were clean colours and cut-out subjects, such as in comics and adverts with separate coloured panels (Example: If you had blue panels on the original, the retoucher would block out the clean blues on the ‘yellow’ negative.) When done, the retoucher would send his four negatives back to the Studio, where a glass positive would be made of each negative. The positives were still black-and-white. The retoucher would then do his final work on the positives, adjusting tones and blocking-out with black lacquer the areas he wanted to keep unaltered. After drying the lacquer in a drying cupboard, he would mix up a bath of ferric cyanide to reduce the rest of the tone on each plate to the density he required, he would wash the plates for five minutes before drying them, and then would black-lacquer out some more tones and reduce other tones on the positives if he felt this was needed. (To explain density range: solid tone was 1.6, reducing gradually, next being 1.5, 1.4, 1.3, and so on, down to .3, which was the last tone for printing. A measurement of .5 of yellow and .4 of red would give a flesh colour on the press.) The retoucher dried the four positives, cleaned off the lacquer with spirit (also produced at Sun), and did his final check. Any lines that were black on the original would be scraped down very low with a knife (which we called a scraper), to flatten them so that the lines appeared only on the black (or ‘key’) positive. The positives, now finished, would be sent to the Planning department.

The process underwent rapid change when the scanning machines came into use: these could process from a transparency or flat copy direct to colour-corrected positives ready for planning, and would require only two to three hours of retouching and spotting. When doing extra nights for the Sunday Times magazine we would have three or four retouchers in at 10 p.m. on a Friday night for urgent work on pages that would be printed on Saturday. The scanner operators would finish up to twelve pages by midnight, the retouchers would work on the positives for two hours on average, and then the positives would be ready for the planners – four to five hours all told for twelve pages. In former times, a retoucher would have taken several days to do the same thing. Before the introduction of the new technology, Sun Printers had had about 100 journeyman retouchers and ten or twelve apprentices in their employ; later, only about 6 retouchers were needed to clean and spot the positives.