From information supplied by Len Leach and Jack Clarke, with an addendum by Geoff Mallord

In the early days of printing on large rotary presses, the stand from which the reel of paper spooled, and which held the next reel, was positioned in line with the first printing unit of the press. When the reel was exhausted, the press had to be stopped, the empty core removed, the new reel mounted, and a paper-join made manually between the end of the old reel and the start of the new one.

Once basements were constructed below the more modern presses, three-hub reelstands were introduced and things got a bit easier. The web of paper now went up to the press through a slot in the floor. Of the three reels on the stand, one was always running into the press. When a reel was nearing its end, the next reel had glue applied manually across the whole of its width, a bell rang at the press (rung by the reel-hand on the older presses but an automatic feature on more modern ones), and the chargehand reduced the speed of the machine while the reel-hand gently pushed the new reel forward until it came into contact with the old reel across its full width. A cord attached to the other side of the reelstand and held taut just in front of the old reel would be sharply pulled by the reel-hand, thus severing the paper from the old reel core as soon as the join had been made.

This operation required split-second timing on the part of the reel-hand, but the success of the join had to do with the glue. Today’s adhesives are much stronger than those of the past. The glue used to be very similar to the wood glue used by carpenters. It was kept warm in a pot and was applied with a brush. The problem was that it tended to start drying before the reel change could take place, and so was a common cause of web breaks.

The three-hub stand was known as a spider. With the introduction of the basement system, reel-hands became known as ‘spider men.’ 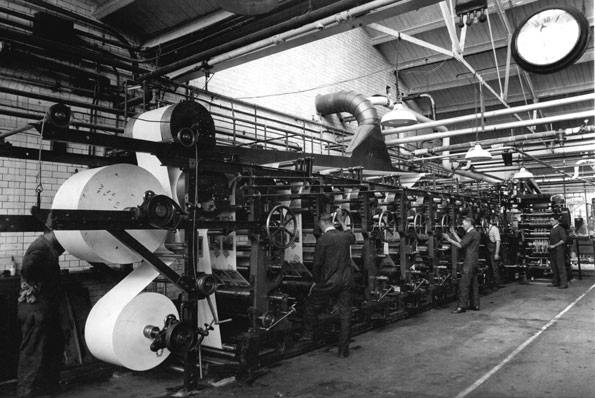 An early press with a reelstand at the first unit 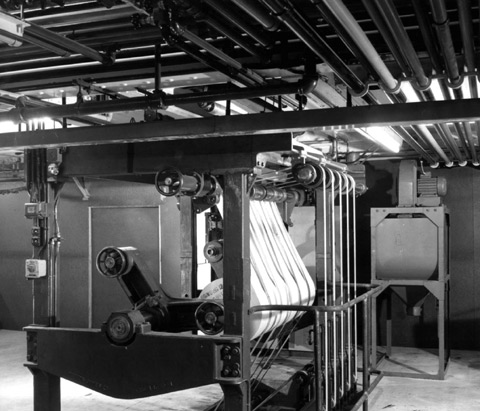 A spider in the basement under a Goss press 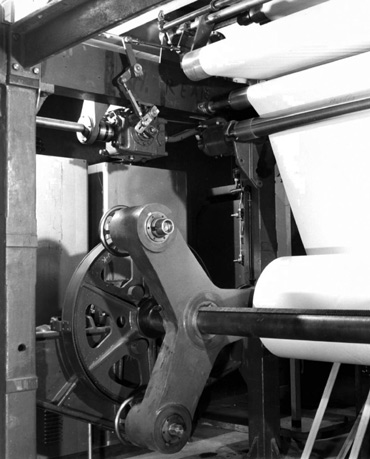 A closer look at the mechanism

Although reel-hands worked in the basement, they were part of the press crew and reported to the chargehand. The job of reel-hand was the highest position an assistant could hold and was also the highest-paid, so once a man reached the position of reel-hand, he stuck to that job. On the biggest presses in the late 1950s there would be two reel-hands plus a floor-hand for each of the three reelstands (nine people in all). On smaller presses there would be two reel-hands per stand. (Today – on newspaper presses, at least – most of this work is fully automated and done by robots.)

During the shift, the reel-hands worked exclusively on their designated press and were responsible for:

• monitoring the status of the reels currently feeding the press

• ordering reels from the Paper Store

The floor-hands, for their part, kept the reel-stand area clean and free of waste paper, and saw to the general tidiness of the work space.

Older presses were slow, about 5,000 revolutions per hour, which meant about 1-1/4 hours between reel changes. With the arrival of the first two Gosses in the late 1950s, that time dropped to 40 minutes between changes. The greater speed of the third Goss (commissioned in 1963) lopped a further 10 minutes off that time. And by 1990 the new MAN press was so fast that a reel change was required every 15 minutes or so.

Between changes, the reel-hands stripped and prepared the next reels. They also had to be ready for unexpected calls for a new reel. At any time, the chargehand might notice a paper problem, decide that a reel change was necessary, and communicate this news to the reel-hand in the basement. In earlier days, communication was often by bells, or by an apparatus resembling a ship’s blower, or by light signal: at the end of the press a light would come on to read ‘JOIN #1’, and a bell would ring; the join would come up through the floor and it was then the register-hand’s job to watch it until it got through the folder. Later on, such communication took place by phone.

With gravure presses running around the clock at Sun, the consumption of paper was prodigious. The September 1972 edition of Sunews reports that, at that time, some 5,000 tons of paper were being used per month.

My favourite job came in 1982 when I became the ‘reel inspector,’ a days-only job that really meant being a coordinator between the machine room and the reel stores, which of necessity had to be some distance apart due to fire regulations, etc. I must have saved the firm quite a bit of money getting part-reels used up.

Sadly, this job disappeared with other cuts made by Maxwell, and I had to return to the reelstands in 1985. I took voluntary severance that year, rather than work in the Litho [web offset] and not having applied to go to the Mirror the year previously.

I feel that I played some small part in Sun history, having seen the inception of all the latest presses at the time – Goss, Koenig and Bauer, Cerutti, and the Albert that came from Odhams – and having worked on all of them in various capacities.

In retrospect my final years at Sun were the least happy. We all say this, and despite the fact that advancement for people such as myself was never possible due to the trade union set-up, we all agree that ‘we [those of us who were there in the 1950s and 1960s] had the best of it.’