During the late 1920s Sun Engraving decided to pursue a new marketing opportunity producing reels of paper pre-printed in colour by gravure, which could be run into – that is, ‘insetted’ in – a newspaper, during the printing of the newspaper. The Sun collaborated with St Clements Press, at that time printers of the Sunday Times, to develop the technology, as none existed at the time, and St Clements’ chief engineer T.H. Fishburn worked with the Sun’s David Greenhill to this end.

The principal technical problem was to register the incoming pre-printed gravure web with the body of the newspaper while it was being printed by rotary letterpress. Fishburn, under DG’s direction, successfully engineered a solution to this problem, using Sun’s equipment, and was granted patents in his own name, which he assigned to the Bell Punch and Printing Company, a firm specialising in the manufacture of ticket vending machines.

The result inevitably was a law suit, because Sun Engraving and David Greenhill felt entitled to some consideration in the matter. In mid 1930 the suit was heard, and was subsequently settled (out of court) in the Sun’s and DG’s favour for the sum of £39,000 – a substantial amount of money in those days – in recognition of the significant commercial potential of the system.

The illustration below shows part of a descriptive promotion that was incorporated, using the new technology, into the Daily Express newspaper as a demonstration system at the British Industries Fair of 1929.

The pre-printed gravure reel contained a hole punched through the paper, positioned in the spine of one spread in a small printed frame. The register system on the newspaper press shone a light through this hole and by means of optical feedback maximised the amount of light received at the other side, advancing or retarding the insetted web as necessary.

The resulting ‘register’ was to an accuracy of plus or minus 1/8 in., quite tight enough, given suitable design of the inset piece. 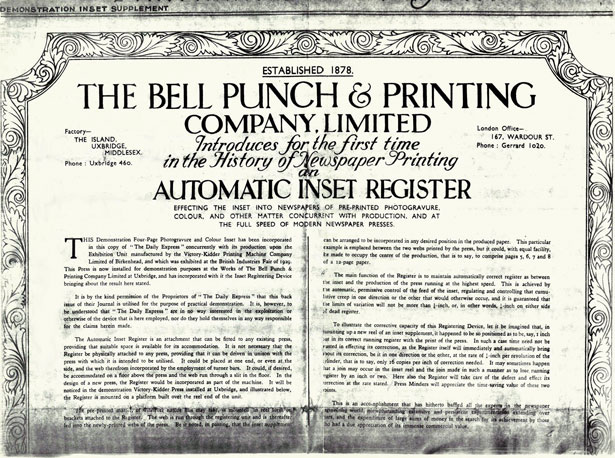