Compiled from: issues of Sun News (including Rembrandt), issues of Impressions, and the Sun archives, with additional input from Barry Humphreys

When Sun management announced, in late 1953 (the exact date is unknown), that the firm was about to embark on a major expansion, the planning of ‘Operation Sunrise’ was already well along. A new paper store had been built in 1950 and a state-of-the-art ink factory had been opened in April 1952, and now it was the turn of the rest of the works to be brought up to date. The plans involved the constructing of several buildings, the enlarging of others, the raising of roofs, the shifting of tons of earth, machinery, and materials, the addition of improved (and newly designed) equipment – in effect, a total reorganization and modernization of the factory.

This ambitious project had barely been launched when a further expansion project was announced – a large factory extension on recently purchased land south of the railway line. A state-of-the-art solvent recovery plant was also to be built, an ink depot to be added, the Paper Store to be expanded. Basements would be modified and used for new purposes. A second tunnel would be run under the railway line to link Sun facilities. Prototypes of all kinds, from the technical (a new drive to rotate cylinders) to the mundane (employees’ lockers), would be tested, advanced equipment and machinery would be introduced into department after department, and numerous production lines would be streamlined. Hardly any aspect of the firm would be left untouched, and virtually every department would be moved at least once.

This article and its photos attempt to recapture something of the heady days of that decade, when the sky was still the limit for the Sun.

The Sun builds a large and modern Paper Store for both flat sheets and reels. Until now, paper has had to be stored in the basement of the main factory. A tunnel is run beneath the railway tracks to link the Store with the rest of the works. 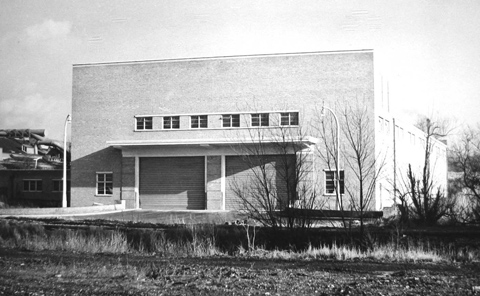 The new Paper Store, photographed in 1951, fronting on Ascot Road. The passageway that leads under the tracks can be seen on the left. (Photo supplied by Basil Boden)

The Sun builds a modern Ink Factory, complete with laboratory, to produce its own gravure ink. 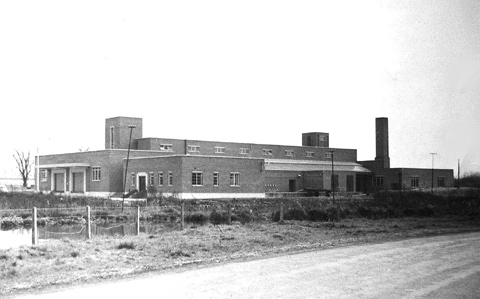 The Ink Factory on Ascot Road, opposite the Paper Store. (From the archives)

Plans for a major factory expansion are announced to employees. The intent: to replace an old factory with a new one; to make Sun Printers ‘The Leading Printing House in the World.’ 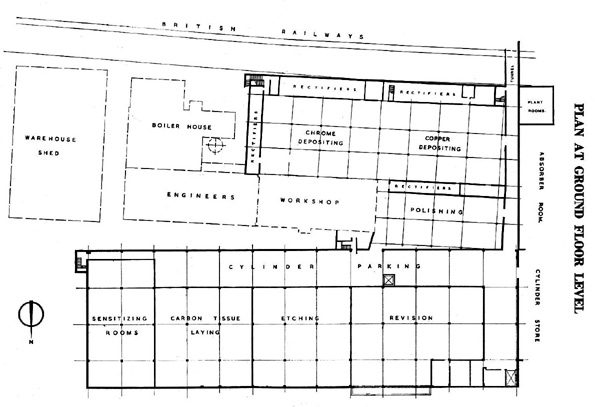 Plan of the East Extension. The new buildings will run parallel with Whippendell Road and the railway line. Chrome Deposition, Copper Deposition, and Polishing departments will be together in a single-storey building near the railway. Sensitizing, Carbon Tissue Laying, Etching, and Revision departments will share a large multi-storey building closer to the road. (From the booklet ‘Operation Sunrise’)

East End Extension – Excavation is proceeding as quickly as the weather permits.

Gravure Machine Room – Alterations to the roof and basement are under way, although slowed by poor weather conditions. 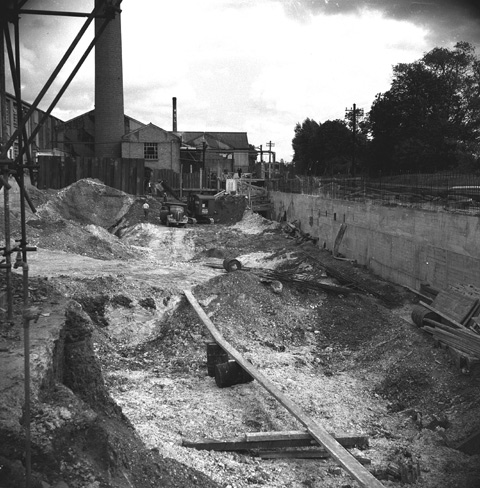 Land near the railway tracks is shored up as a first priority in the excavation for the single-storey building. (All six photos by Leslie Hodge) 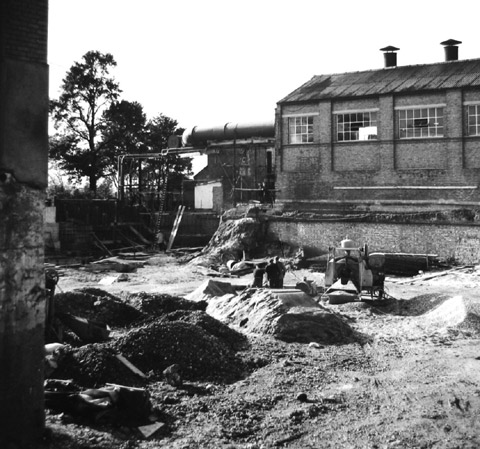 Excavation for the single-storey building, with the first spirit recovery plant, built in 1939, in the background. 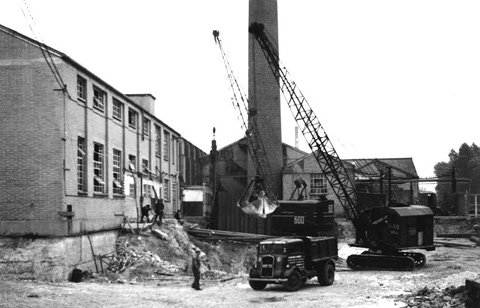 The single-storey building will be flanked on its other three sides by the Engineering Shop (on the left), the boiler house (centre), and the tracks (to the right). 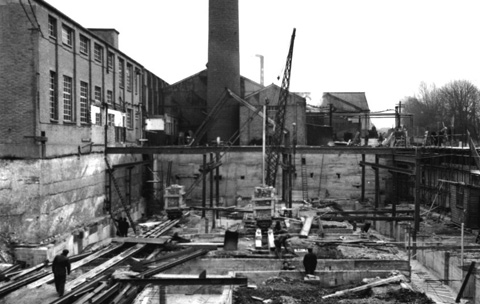 The foundations are now laid and the structural steelwork is going up. 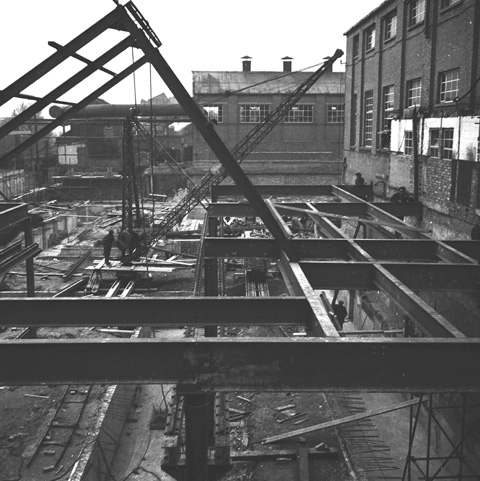 The construction site as seen from the boiler house, looking towards the spirit recovery plant. 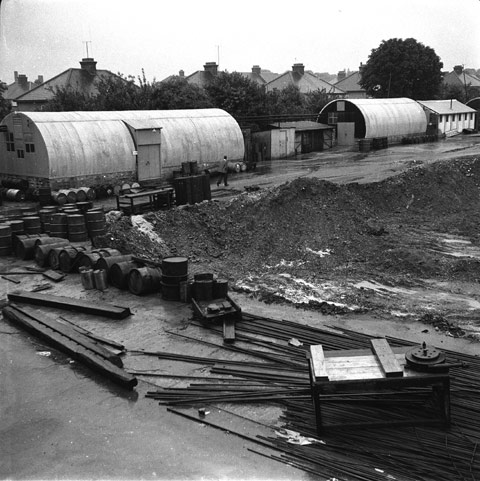 Excavation is also proceeding for the multi-storey building whenever the frequent rains allow.

East End Extension – Despite the unfavourable weather, excavation is progressing satisfactorily. Management, the Operations Research Department, the architect, and the technical specialists dealing with lighting, air-conditioning, and other services have completed the detailed planning of the basement of the new buildings.

Gravure Machine Room – The new roof of the first bay has been completed and the bay recommissioned. Work is proceeding well on the second bay.

Architect’s drawing showing how the new roof will be built above the existing roof in each bay of the Gravure Machine Room. Each old roof will be dismantled only after the new one has been completed. (From the booklet ‘Operation Sunrise’)

East End Extension – The extension is on schedule, the bulk digging is 75 per cent done, the foundation of the single-storey building is nearing completion, and the structural steel work is half erected. The building contractors will next construct shuttering for the casting of the concrete slab roof, after which the north light portion of the roof will be glazed and sheeted. Construction is also proceeding on the multi-storey building (which will be called the Process block).

Gravure Machine Room – Despite relentlessly bad weather conditions, steady progress is being made on the second bay. The steel stanchions have been erected on the third bay. 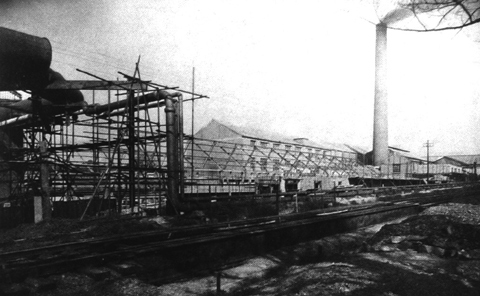 Gravure Machine Room – Work on the second bay is proceeding smoothly. By mid-April the bay will be recommissioned. Work on the third section is gathering momentum and is on schedule. This major alteration to the premises will be completed a month or two before the arrival of the new big presses. 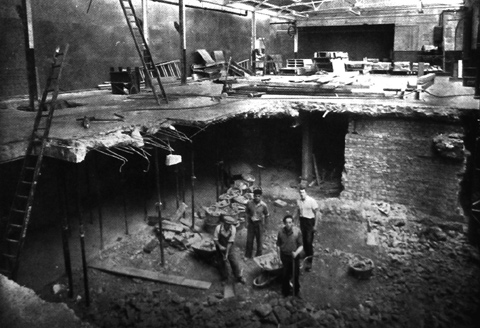 The floor of the Gravure Machine Room is demolished, to be replaced by one strong enough to support the new presses. (Photos by Frank Symmons) 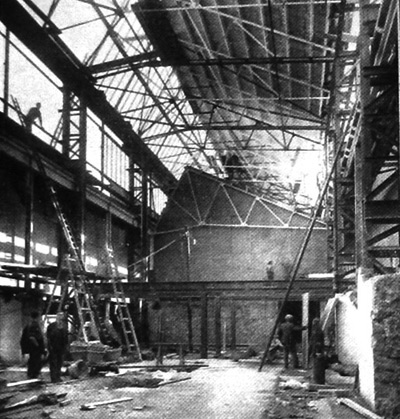