The Albert press was installed in 1977 amid a fanfare of publicity that it would bring catalogue work back to Watford. It didn’t.

When I joined Sun in 1979 I was told by Bob Phillis that one of my priorities would be to sort out the problems that were being experienced with this press. Most of the time it failed to perform to anything remotely like its capability. It was capable of running at in excess of 35,000 revolutions per hour, but rarely exceeded 25,000 and most of the time it ran below 20,000. The tension control system was inconsistent. The press was an embarrassment.

The engineers said the printers were incapable of handling the technology of this press. The printers said the press was incapable of doing what it was claimed to be able to do. This was in many ways a simple press: one reelstand, ten printing units, 1,800 mm web width, and one folder with two deliveries. Some of the older Sun presses had four reel stands and achieved speeds not much less than this new press. I researched some of the history and was appalled to read a report by a senior manager about a visit to the Albert plant. It began – “after two or three large duty-free G&Ts we started to discuss the technical problems being experienced.”

A few weeks after I joined Sun, a meeting with Albert took place. Boris Fuchs (Managing Director), Gunter Gebhard (Sales Director), and Arno Niedermeier (Chief Designer) of Albert, plus Julius Karp of Pershke Price Service (U.K. agents for Albert) attended. Sun was represented by Bob Phillis (M.D.), Gerald Mowbray (Works Director), Bert Creighton (Chief Engineer), Alan Hoare (Printing Technical Manager), Mike Batchelor (Printing Manager), and myself. The meeting lasted about one hour and was a farce. I found it difficult to believe what I was hearing. I wasn’t able to input a lot about the press problems (nor could anybody else from Sun) but I was able to focus the attention of everybody by stating: “It seems to me that we have your press and you have our money; the money is good and the press isn’t.” The meeting broke up and we walked through the pressroom to see the press. On the way, my sleeve was tugged and I was “advised” that I could not say such things to these people, as they were very important. My response was that the press was two years old and was a disaster. It was as much in Albert’s interest to get it right as it was in Sun’s. If the Sun press continued to fail, Albert would never sell another gravure press in the U.K. I was again told that the press was fine; the problem was that the printers couldn’t run it. 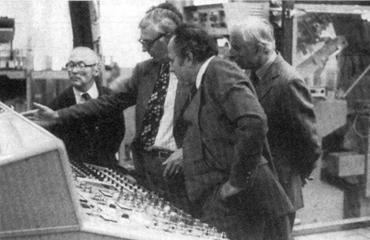 The outcome of this meeting was that Albert would send three technicians to Sun for three days to examine the press. The Sun engineers scoffed at this outcome and said that Albert had sent lots of their technicians before and none had found anything wrong with the press. Nevertheless Messrs. Bernauer, Geminn, and Herb arrived. These were more senior guys than Albert had previously sent. At lunchtime on their first day, I asked if they had found anything wrong. Not yet, they said, but we will know all about this press before we leave on Friday. They did. They told me then that the press had been incorrectly installed – in fact it was the worst installation they had ever seen. The wide-range variable-size folder had a selection lever, which was used to set the folder gearbox in a range matching the cylinder circumference; once in this range, the folder speed was precisely matched to the cylinder circumference by adjusting an electronic tachometer. Both these operations were simple adjustments to be carried out by the printers. They discovered that the selection lever intended to set the initial range wasn’t connected to the folder gearbox. As a result, the folder was always set to one size, and the press had only performed well when the cylinder circumference coincidentally matched this size, or was in the relatively small range of adjustment of the electronic tachometer. The rest of the time, the folder size (and speed) could never match the cylinder circumference, a fundamental requirement in rotary printing. The Albert engineers were amazed that Sun operators had been able to run the press at all.

They put all this in a report that stated that it was “virtually impossible to run the press at a speed higher than that practised in the past by your operating personnel.” Albert Frankenthal paid Sun Printers £73,828.00, being 50% of the additional costs incurred for paper waste and overtime.

I have the original paperwork from Albert Frankenthal.

Subsequent to this remedial work by Albert Frankenthal, the ‘TR5S’ performed consistently at its expected level, printing a range of catalogues and weekly consumer magazines until Sun’s gravure operations were closed down in the early 1990s. The press was sold with the ex-Odhams 13-unit Albert ‘TR5S’ to VNU Netherlands.